While having breakfast, I was thinking, there can’t be any hidden places so much near to the big towns like Mumbai and town. I was proven wrong in a matter of hours.  I was watching wide eyed at the beauty that unfolded in front of me.

The electricity didn’t go out thankfully in the night, or if it did, I didn’t realize. I had set up the alarm clock at an optimistic 6.30 AM, and got up at a humane time – 7.30 AM. The breakfast was  a grand affair. I think they had prepared a couple’s breakfast, and realizing I am only one staying in the room, served me the combined one.

I rode to Roha, for river rafting and other river activities. I was told very confidently by a person at the hotel, that the river rafting can be done any time we want. I was highly suspicious of this, as I had read that the river rafting was dependent on the water release by the nearby dam, and certainly didn’t happen all day long. Yet, I reached Wild river center about 9.30. No one was there except a cranky old guard. I made myself at home, clicking pictures here and there.

Finally the owner came at about 10.00. Got the good news, that the water rafting is not done there. It is done is Vile, which is opposite of this place from my hotel, and is done in morning 8.00 A.M. Some hotel owners had told me that Monday is a holiday for this water releases, but I couldn’t confirm that. So OK, I thought, out goes the water rafting. What else? They had a package for kayaking, river fox and river crossing.

This was my first time doing kayaking. It is really very soothing; you are on your own rowing your boat, not dependent on anyone else except maybe the water current.

Row left to go to right, row right to go to left, I was instructed. Fine, but how to go straight? All I could manage for first few minutes is to dance on water taking full left turns and then full right turns. Then I realized, that in kayaking, you row straight ‘on an average’. That is you put equal left and right strokes to generally go in straight direction, which consists of oscillating between left and right direction. Nevertheless, it was fun, and really relaxing.

Later came the river jumping. I was made to wear the harness, and sooner than I thought, I was sitting at the corner of a platform, looking ahead to my drag many feet down in the river, and wondering whether I should rethink this part.

Before I could manage a word of opposition, I was pushed by the helper, and thus was left with no other option to ‘fly’ forwards and fall in the water.

Last part was river crossing, where you cross the river by walking on a rope, and holding an upper rope for support.

It goes fine for initial steps, and you build up confidence in no time. I was happily sliding along, fully confident that I would finish the crossing. But once you come around center, the ropes start to swing violently, and you are dancing on them as a puppet on strings. Didn’t make it to the end, and fell ass backwards in the water.

On return journey, some heavy rains caught up with me. But now the rains didn’t come as threat to me. The Duckback kept it well away.

The stop while returning was the Sutarwadi lake. It is on way to Vile – Kolad. I stopped at the village Sutarwadi, and started asking for the lake. Surprisingly, no one knew about any lake! I still continued ahead, putting a 5 kilometer stoploss, that is if I couldn’t find anything in 5 kilometers, I will turn back. After about 4.5 kilometers, I passed through a proper antique village named Dagadwadi (literally society of stones). Asked a grandma hanging out in the courtyard.

Seeing her confused reaction wasn’t convincing, but yet the stop loss was still half a kilometer ahead. After passing through that rustic village, I continued on the small path, and grasped.

A beautiful lake was visible through the cactus bushes. I hurriedly rode there, parked Vesta and ran to the lake. It was splendid. The coconut plantations on its shores, the wide waterbed made the whole view grand. But it was raining as hell. There was no chance of taking any photo, and this frustrated me a great deal. Come on, I kept on urging the rain, give me two minutes break. But as always, he didn’t listen, and I kept waiting for half an hour standing in rain for it to go away. There was no sheltered thing nearby, except a samshaan ghaati nearby. My photographic urge was telling me to go there and click, because after all, the dead ones are gone! But my superstitious mind was not willing to go there. After a while, I returned to the village, and borrowed a broken umbrella from one of the houses. From under that umbrella, I started clicking photos and videos. It was not to my liking, but something is better than absolutely nothing.

See the rain drops, somehow the camera focused on them rather than on the scenery!

While coming back to the village, I noticed a tree, and started clicking its photos from under the umbrella. I saw in the view finder, and said ‘wait a minute. How come the sky is appearing blue in this photo, when its raining?!’

I looked up in the sky in disbelief, to find all the rain clouds flown away, and sun shining in its glory. And here I was standing with an umbrella with camera in one hand wearing full rubber raincoat! It was getting unbearably hot under that getup, but the views were totally worth it. I couldn’t believe my luck, 5 minutes ago it was all monsoons, and now it was basking in beauty. Then for a very brief period, maybe for a couple of minutes, everything stood still, including the water. I kept on gazing the view with open mouth, to see the clouds reflected in the lake.

This view lasted for hardly a few minutes, and soon all the lake was filled up with ripples, letting go of any reflections.

All this sounds very hard to believe, so this is a video proof. The first half shows the panning done under an umbrella, see the water dropping, and hear the rain splattering on the umbrella. The second half is shot just after 5 minutes. The birdcalls are real, not added afterwards.

After a long round of photography till satisfaction, I returned to the village to give back the borrowed umbrella.

Vesta waiting for me in front of the house of borrowed umbrella. 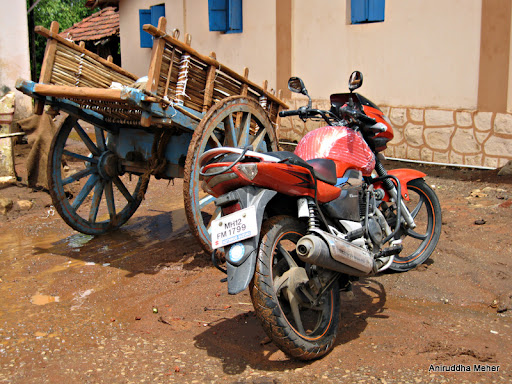 Competing for the top spot in the village! The bullock cart won by majority of votes.

After lunch at hotel, I was all set to visit the next halt. In Kolad, I missed the poster attraction – white water rafting. But I did some things for the first time, and found out the view. While checking out of the hotel, I was glad I made Kolad the first stop of the trip.